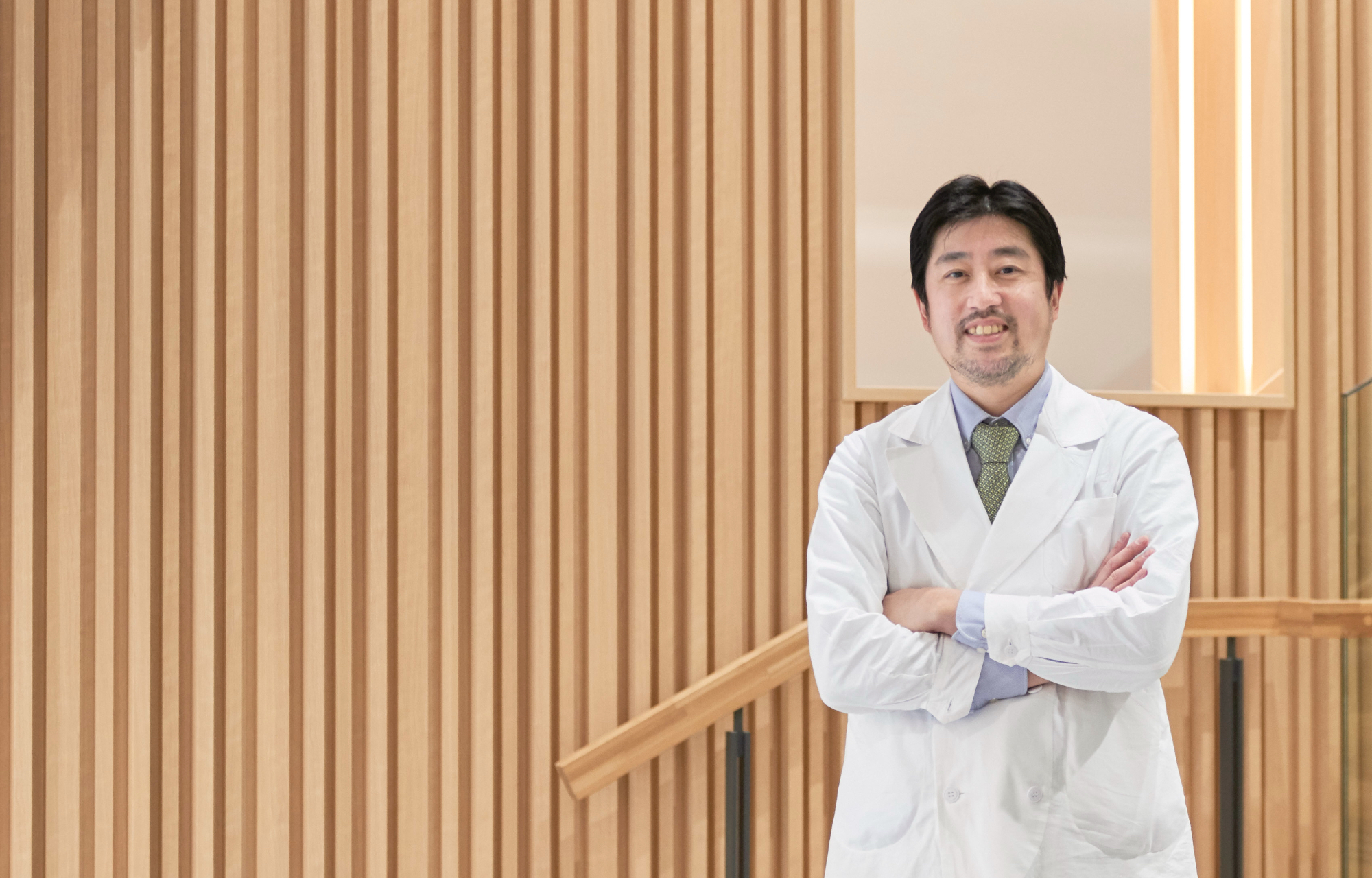 As Japan is becoming a highly aging society, we are entering an era where patients suffering from heart failure are examined at home. Accordingly, it has become a major issue as to how quickly the exacerbation of the patients’ condition can be detected at home. At the sleep apnea group, we are working on initiatives that meet the needs of the time. These initiatives include conducting research on patients suffering cardiovascular diseases with sleep apnea syndrome (SAS), development of remote monitoring system and remote rehabilitation system for at-home patients with heart failure, and research to further promote medical cooperation, etc.

I became interested in sleep after meeting a patient with severe heart failure accompanied by SAS. Implantable cardioverter-defibrillators (ICDs) were not yet widely used at that time and I was always on standby at the hospital for persistent ventricular tachycardia which occurs frequently at night. Whenever I was called, I had to rush to give an electric shock to the patient. This was my daily routine. Under the guidance of a respiratory physician who specialized in SAS at the Toranomon Hospital where I was working at that time, I came to realize that SAS (central sleep apnea) affects the occurrence of fatal arrhythmia in this particular patient and decided to use bi-level positive pressure breathing therapy (bi-level PAP), which was a new attempt at that time. Thereafter, the patient could sleep peacefully with no occurrence of fatal arrhythmia and I was no longer called in the middle of the night. In addition, the patient could be discharged from the hospital as it was found that his cardiac function had improved. I was greatly impacted by this experience and have been studying circulatory organs and SAS ever since.

After completing the doctoral course in cardiovascular medicine at Juntendo University Graduate School of Medicine, I started working in clinical research on cardiovascular diseases and SAS at the Toranomon Hospital Sleep Center. Thereafter, I went on to study at the University of Toronto, Canada. It was there that I had the opportunity to conduct research under Professor Douglas Bradley, who was considered to be the leading authority on heart failure and SAS. Just when I returned to Japan, I heard that a new SAS section would be launched in the department of cardiovascular medicine at the university and so I returned to Juntendo.

In Japan, which has become a highly aging society, it has become necessary to examine heart failure patients at home throughout all regions including the Tokyo metropolitan area. However, when a patient suffers from heart failure, breathing abnormalities may occur at any time. If the condition is exacerbated, the prognosis will worsen, leading to repeated cycles of hospitalization and discharge. Therefore, through joint research with medical and nursing care bed manufacturers, we began developing a “remote monitoring system" which uses a device that can monitor the condition of patients while sleeping. It is a system that remotely transmits various biological information such as the patient's breathing and pulse information and identifies exacerbation of heart failure at an early stage. With the revision of medical consultation fees in 2018, remote monitoring for sleep apnea syndrome using CPAP has been newly added. Moreover, it was found that respiratory changes could be detected through CPAP remote monitoring data when the conditions of SAS patients using CPAP are exacerbated. This led to the development of devices and systems that can predict exacerbation at an early stage by remote monitoring, incorporating respiratory parameters even for patients who do not use such devices as CPAP. We are conducting research in collaboration with clinics that specialize in at-home treatment of heart failure and doctors who provide home medical care.

Some of these remote monitoring systems have already been approved as medical devices after completion of clinical research and have reached the stage where they can be put into practical use once algorithms specific to heart failure are completed. Recently, we have been receiving consultation inquiries various companies on the development of remote monitoring systems from other perspectives and I feel that demands in this field are on an upward trend.

It is essential that cardiovascular medicine, respiratory medicine, otolaryngology, clinics and home medical care work together to treat SAS. Currently, we are conducting research to verify whether or not comprehensive intervention in collaboration with other fields will improve the QOL of patients and reduce hospitalization. Most likely we will conduct research while sharing remote monitoring information with clinics and doctors who provide home medical care. In addition, the introduction of successful collaborative paths that have already been introduced in some regions and related research is some of the topics that will be focused on in the future.

Regarding SAS causing heart failure, global multicenter clinical research steered by the University of Toronto is underway. I serve as the secretariat in Japan and have enrolled cases from 6 facilities in Japan including ours. There are only a limited number of people in Japan who specialize in this field and it my hope that our group can become the core in leading the research.

We have also published several papers on heart failure and SAS. Not many research works exist in which sleep tests are performed during hospitalization for patients with heart failure in the acute phase. However, when sleep tests were performed on such patients, it came to light that SAS is highly prevalent (up to 70% of them have SAS). This data has been reported in a paper and we plan to continue such research in the future.

Over the last few years, several large-scale clinical trials have been reported that no improvement in prognosis was seen after intervention with positive airway pressure therapy such as CPAP for SAS. It is presumed that the aforementioned results were affected by problems such as adherence to treatment, resulting in the probability that the research did not proceed well. By applying these lessons learned in the research on heart failure patients that are presently being conducted with overseas researchers from Canada etc., we are frequently confirming patient adherence in order to maintain the same level of medical treatment for positive pressure breathing therapy in Japan. In this way, I believe that this study will be more practical in accordance with Japan’s clinical environment.

In addition, since the intervention method used thus far has exclusively been positive airway pressure therapy such as CPAP, it is also necessary to consider other options. Since it has long been a concern that positive airway pressure therapy such as CPAP may worsen the condition of patients suffering from heart failure, alternative therapies for CPAP are also under discussion at present. For example, implantable devices similar to pacemakers are being used overseas. Although it has not been decided whether or not such devices will be launched in Japan, if we take the initiative in introducing such latest equipment and interventions, new developments may take place in the next 5 to 10 years.

We are also focusing on drugs for the treatment of the sleep apnea syndrome. Until now, there were no such drugs; however, recently some reports have begun to be published. Accordingly, our group is also participating in clinical trials and conducting an independent clinical research. It would be wonderful if people suffering from cardiovascular diseases could benefit in some way from the use of such drugs.

The concept of heart failure has been ambiguous and only recently it was established as a disease category. Many complications exist and the entire body of the patient has to be examined. I often talk to my junior colleagues that when diagnosing heart failure, it is necessary to examine it from the perspective of “general internal medicine in cardiology.” In order to maintain the patient's QOL and improve the prognosis, it is necessary to always look outside the heart and consider its connection with other organs. Needless to say, this also applies to the SAS. As a doctor of cardiology, it is necessary not only to examine the entire “cardiovascular system” but to also manage various complications, which make this field a difficult but a fulfilling one.
On the other hand, key factors in research can be summed up in 2 words, namely fighting spirit and will power. This applies not only to cardiology but also to other research fields. Please cherish your passion for research, if nothing else. At the same time, you cannot go anywhere in research these days without language skills. Therefore, I would recommend that you at least brush up your English skills from a young age. When I was doing clinical research at the overseas university where I was studying, I experienced hardships because of the need to ask local patients in English for their cooperation in my research work. Our group often handles foreign medical devices and research equipment and almost every day we have direct interaction with overseas medical device and research equipment manufacturers. Instead of studying out of desperation when an opportunity to make a presentation at an overseas academic conference comes up, I recommend getting used to English on a daily basis by making it a habit to ask questions at online conferences and academic conferences prior to that situation.

After graduating from Juntendo University School of Medicine in 1998, he received his doctorate in medicine in 2006 (cardiovascular medicine). After working at the Sleep Center of Toranomon Hospital, the Federation of National Public Service Personnel Mutual Aid Associations, and as a researcher at Department of Sleep Medicine, University of Toronto, Canada, he has been serving in his current position since 2018.
Received the 2006 Society of Clinical Respiratory Physiology, the 2010 Toronto Rehab 6th Annual Research Day Poster Award and the 2012 Fukuda Foundation of Medical Technology Research Paper Award, etc.
Areas of specialization are sleep apnea syndrome and heart failure.