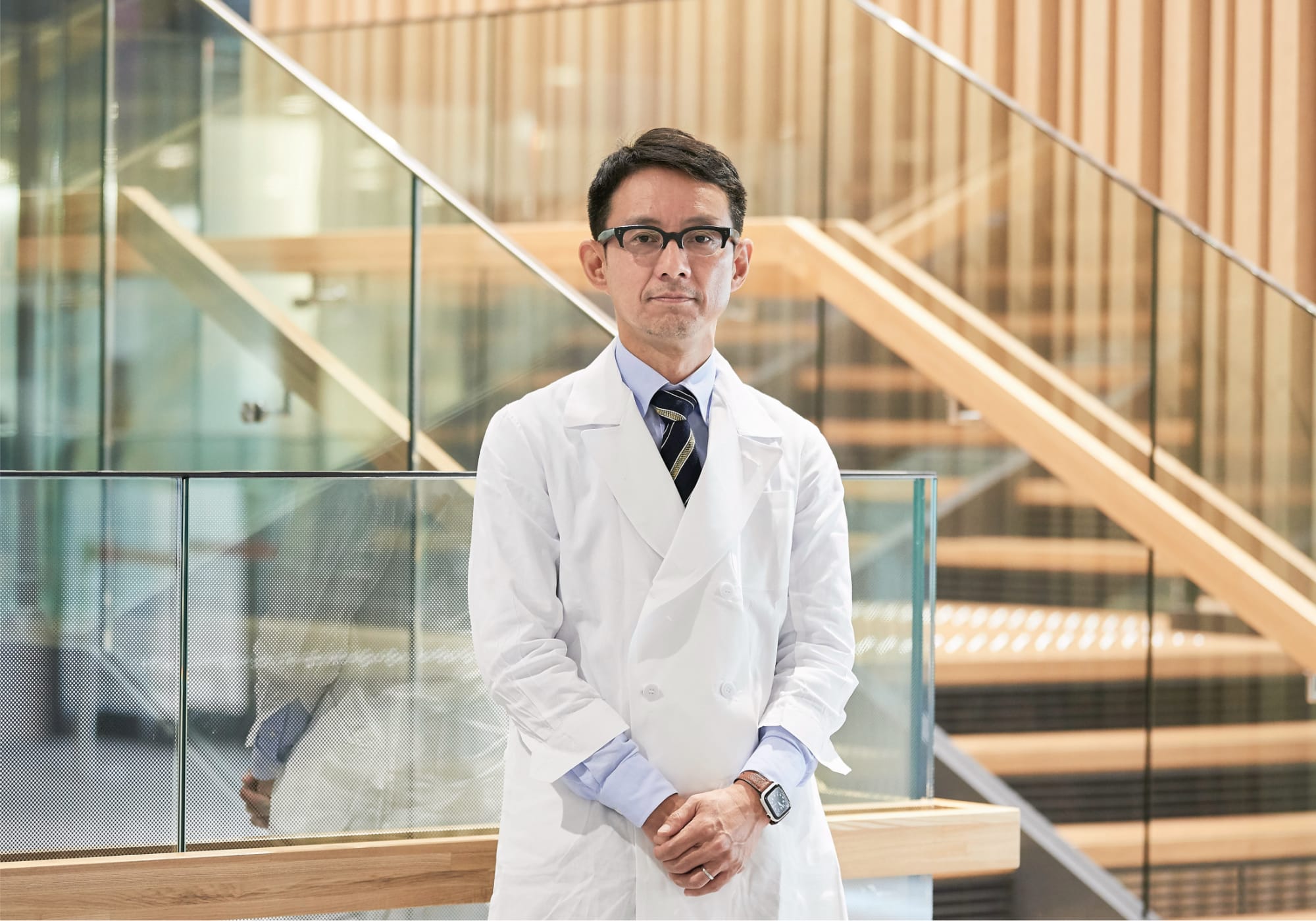 For preventing arteriosclerosis,
Keeping an inquisitive mind about science as a physician scientist.

"Translational research" is conducted with the objective of putting medical seeds found through persistent fundamental research into practical use at medical institutions. Dr. Iwata is particularly focusing on this research among the various types of research work. In elucidating the mechanism of arteriosclerosis, Dr. Iwata has been exploring this for many years and he is continuously making efforts toward the realization of clinical medical technology.

The medical technology in the cardiovascular medicine field has made a remarkable progress since I became a doctor in 1998. This may also be the reason for my increased interest in this field. I was fascinated by the fact that catheter treatment can be performed by less-invasive approaching from a blood vessel compared to surgical approaches. The catheter treatment at that time was mainly intervention for stenosis or occlusion of coronary arteries. Toranomon Hospital was focusing on that field and I remember very well that I held admiration for the front-line doctors at that time.

I started full-scale research other than clinical research after I joined the graduate school of the University of Tokyo in 2002. At the University of Tokyo, I started exploring the relationship between the cells derived from bone marrow and smooth muscle-lineage cells. Subsequently, while studying at Brigham and Women's Hospital in Boston in the United States from 2012 to 2015, I conducted some basic research on the involvement of macrophages in the progression of arteriosclerosis. In addition, through Toranomon Hospital, the University of Tokyo, and Brigham Women's Hospital, I continued to be engaged in clinical research, including retrospective analysis of patient clinical data and large-scale prospective intervention studies, etc.

"Research" is a very broad term, and there are various types of research work. Basic research is the one that explores pathological or physiological conditions and treatment mechanisms by using small animals and cells. In contrast, there is clinical research conducted by using clinical data of the patients, and this includes intervention research and observational research. I have conducted a variety of research, from basic to clinical and epidemiological research. Among them, I found the field of "translational research" most interesting. This field lies at the boundary between basic research and clinical research. I am deeply interested in how to bring the insights gained from basic research into clinical practice and how to apply the concepts and mechanisms renamed by researchers to establish them as treatment methods.

Discovering new mechanisms in the relationship between arteriosclerosis and inflammation

Arteriosclerosis is one of the major topics. In arteriosclerosis, the tissues keep altering and modifying in a non-ideal direction. The main focus is on understanding the mechanism by which it occurs and what intervention is required to stop its progression.
We are focusing on the fact that inflammation occurs in parallel when bad cholesterol (LDL) is high, and the emphasis of our research is on the mechanisms centered on inflammation.
Arteriosclerosis (coronary artery disease), atrial fibrillation, and aortic stenosis progress with aging and as people get old. We see these three separate diseases as a form of cardiovascular remodeling getting along with aiging and we are exploring the common mechanisms, or the mechanisms that are unique to the disease.

As a candidate mechanism, we are considering a possibility that this mechanism plays a role in extracting toxic cholesterol from tissues such as blood vessels and returning it to the liver, because of which the function of HDL, known as good cholesterol, declines, as a result of which, the tissue remodeling will progress and cardiovascular diseases will advance. If this hypothesis is correct, finding reasons for the decline of HDL function and finding ways to stop it may help control or prevent aggravation of multiple lines of cardiovascular diseases that progress with aging.

While I am conducting the research work mentioned above, at the same time, I have been a chief in charge of the cardiovascular intensive care unit (CCU) since I became a part of circulatory organs at Juntendo University in 2015. In the field of cardiovascular clinical practice, especially when you is involved in the medical care of critically ill patients, since you can feel the requirements of practitioners and their clinical doubts, I think that there are many important and clinically relevant ideas that may come from there.

he department of cardiovascular medicine of Juntendo university has a very long history, and we have a clinical registry database of catheter cases with lengthy history. The scale itself is that of a standalone facility, and the total number of cases accumulated is about 11,000, and there are many other registries larger than that. However, thanks to the efforts of former Professor Hiroyuki Daida, the database where data has been accumulated for more than 30 years since 1984 which is very unique, and it is an extremely rare database. We are indeed privileged to have such environment where we can use this database for research. In research related to aging, Professor Tohru Minamino, a leading expert in Japan, joined since last year and I can confidently say that we have a very fascinating research environment in place.

The means of curing ill people have been well developed, but I believe that the mechanisms by which they do not become ill are still not very clear. In addition, as a so-called blockbuster, there are examples that were not clear until now, that is, some kind of disease mechanism was suddenly discovered, and with the evolution of computer science, it is established as a treatment method in an extremely short time unlike before. There is still much left to do for us. Physicians and medical professionals who treat patients are not only clinicians, but also scientists, and they need to have the ability to evaluate many materials objectively from various materials. In the process of building the career as a clinician, it is extremely important that research period should be set, or it is very important to have an exposure to science including basic and translational research and the underlying way of thinking and logic.

Like myself, I think there are many people who want to do dynamic procedures such as catheterization and ablation as their main work in cardiovascular medicine. However, not only that, I hope that they will have as many opportunities as possible to feel the fun and depth as a scientist.