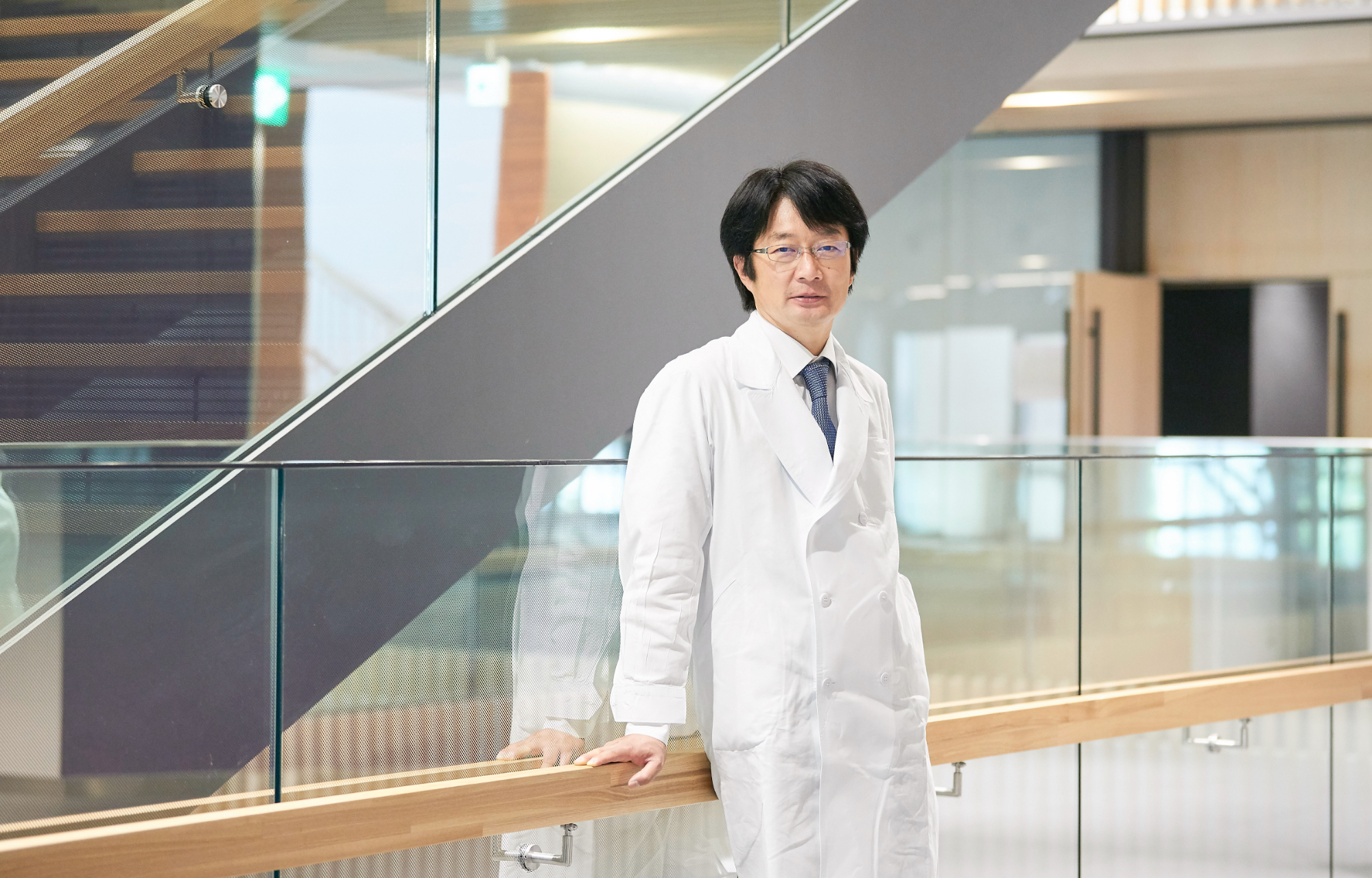 Establishing treatment guidelines for pulmonary hypertension and aiming to conduct research that also contributes to the medical economy.

"Pulmonary hypertension" is a disease in which the blood pressure of the blood vessels (pulmonary arteries) sending blood from the heart to the lungs, increases. The mechanism of its onset is still not clear. Pulmonary Hypertension Group is conducting research on pulmonary hypertension focusing on the topics such as how to suppress pulmonary vascular remodeling through smooth muscle cell proliferation and how to find biomarkers that can become new diagnostic indexes.

The environment in the hospital where I gained experience in my initial training was predominantly one of team-oriented medicine in which all doctors, regardless of age or position, treated the patients together with eagerness. Amid such an environment, I pursued the Department of Cardiovascular Medicine where I had several opportunities to sense the importance of conducting oneself as a team member.
Cardiovascular medicine may involve treatment of all stages from the acute phase to the chronic phase. This entails a wide range of knowledge and techniques such as diagnostic imaging and catheter examination. It has both surgical elements as well as elements of internal medicine, and there are many people who are likely to be interested in and aspired by catheter examination / treatment and diseases such as arteriosclerosis. I was one of such people when working as a resident doctor. As I was carrying out my research, I became particularly interested in "pulmonary hypertension".
When I was a student, pulmonary hypertension was a disease that was mainly treated by respiratory medicine. However, when considering the mechanism thereof, pathophysiology of pulmonary hypertension can be said to be a cardiovascular illness. By the time I returned to the university, therapeutic drugs for the treatment of pulmonary hypertension had already been launched. However, as I felt that there was still much work to be done in this field, I embarked on my research work.

Since 1998 when research on nitric oxide (NO), a vascular relaxing factor, received the Nobel Prize in Medicine and Physiology, research on NO and pulmonary hypertension has been gaining momentum. However, the first therapeutic drug was launched in 1999, and the ED therapeutic drug began to be used for the treatment of pulmonary hypertension in 2008. In that sense, this field has a short history and many things are yet to be explained . Although various papers have been published, as of 2020, vasodilators are basically the only drugs available to suppress smooth muscle proliferation in blood vessels.
As with all illnesses, it is difficult to provide an explanation for an unknown illness, which is the reason I find my studies rewarding. However, having said that, the research we are focusing on is only fragmentary and research cannot solve everything. In spite of the challenge, we are continuing our research keeping in mind the role it can play in the future.

There are indexes for diagnosing pulmonary hypertension such as BNP, which is known as a marker for heart failure; however, there are currently no established and proven markers. I intend to continue my research in pursuit of them.
In Japan, patients suffering from pulmonary arterial hypertension (PAH) and chronic thromboembolic pulmonary hypertension (CTEPH) are basically not required to bear any expenses if said diseases are designated as intractable diseases. If applicable, the patients can benefit from the healthcare system. However, it is necessary to clarify whether the patient really needs two or three drugs, or one drug is enough, or whether these drugs really work in the first place. If we can establish a therapeutic index of how effective the drug is for vascular lesions, I believe that it will be of great significance to the treatment of individual patients as well as for the medical economy.
Our research has been focused on smooth muscle cells of pulmonary blood vessels, but we are also developing research from the perspective of pulmonary hypertension and chronic renal failure. We are at the stage of continuously discussing and exploring future directions. We would also like to broaden our research to include fields other than blood vessels, such as right heart function in heart failure.

Smooth cooperation with other departments in both treatment and research of pulmonary hypertension.

Pulmonary hypertension may be idiopathic without an underlying disorder, but the same extent, there is also pulmonary hypertension associated with collagen disease, connective tissue disease, and portal hypertension. Therefore, in-hospital cooperation with other departments such as gastroenterology and collagen disease is important for early detection of patients suffering from pulmonary hypertension and for providing therapeutic intervention. Of course, there are referrals from other hospitals; however, one of the features of our hospital is that we have a large number of referrals from other departments. Fortunately, there are excellent internal cooperation in our hospital and an outstanding environment which facilitates early detection of pulmonary hypertension where the three departments consisting of collagen disease, respiratory internal medicine, and cardiovascular medicine are working together. This environment provides peace of mind to even high-risk patients when they undergo medical examinations.
We often collaborate with doctors from other departments, such as respiratory medicine, for research. I am very grateful that we are able to leverage one other's strengths and acquire new knowledge and methods.

The more I devote myself to study, the wider my field of expertise becomes and the more variety of challenges I can take on

Looking back, I think that cardiovascular medicine in the past was often more difficult than the present. In the days when there was no stent, catheter treatment for myocardial infarction was difficult because the cycle of opening and then closing the blood vessels had to be repeated. In addition, since rehabilitation was not established, it took a long time for patients to be discharged from the hospital. Treatment was not established and it was not rare for some patients to suffer heart failure.
Very effective treatment is now available for the acute phase and it has become possible to act systematically in the chronic phase as well. It would be untruthful to say that there are no difficulties and the difficulties vary from department to department. Nevertheless, compared to the past, it has become less common for doctors needing to be on call to attend to the patients constantly, at any hour of the day.

1994 Graduated from Juntendo University School of Medicine. 2002 Completed the doctoral course at the same university.2003-2006 Became a researcher after completing the doctoral course at the Falk Cardiovascular Institute, Stanford University.
Areas of specialization are clinical cardiovascular medicine, pulmonary hypertension, and arteriosclerosis.