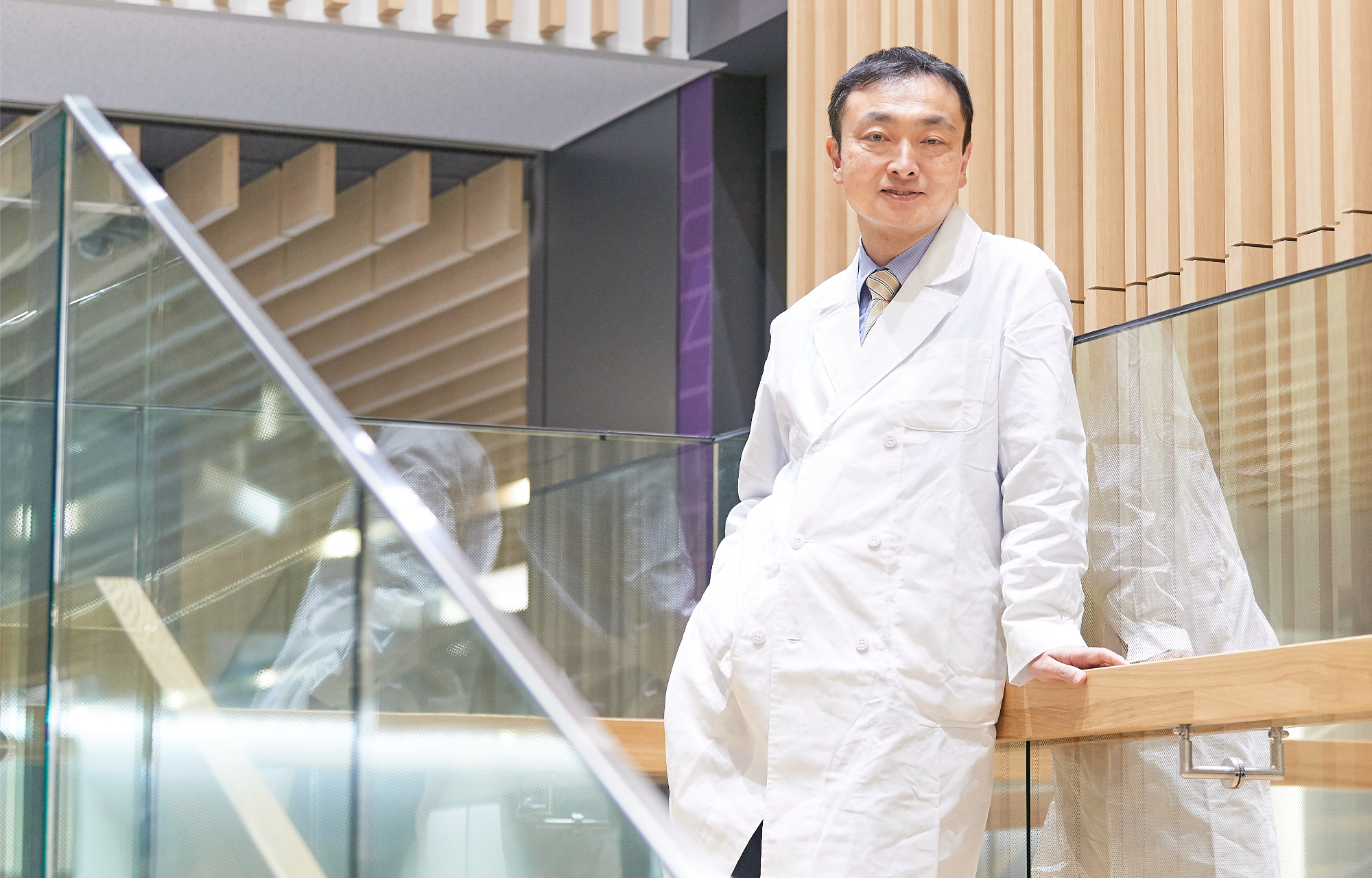 Searching for new anti-inflammatory therapies that will contribute to the prevention of cardiovascular diseases.

Dr. Kikuo Isoda was one of the first researchers to focus on the relationship between anti-inflammatory cytokines and cardiovascular diseases, a field previously unfathomed in the cardiovascular field. The Inflammatory Immunoregulation and Vascular Biology Group has further advanced its research and is exploring new possibilities from the perspective of inflammatory immunoregulation in order to bring further benefits to existing treatments.

Cardiovascular medicine is a clinical department where we often witness patients recovering within a short period of time. Percutaneous catheter intervention (PCI) allows the blood to flow quickly through the clogged blood vessels and simultaneously removes pain, providing relief to the patients. The patients may be discharged from the hospital in about 7 to 10 days, including rehabilitation time. I became attracted to such treatment where immediate results are seen after the treatment. My original interest was in subjects such as physics and mathematics; therefore, I was also drawn to fields that theoretically involve these subjects, such as hemodynamics. I thought that cardiovascular medicine is the path that I should choose.

When I was an intern at the National Defense Medical College, I had several opportunities to take a closer look at the walls of blood vessels by using intravascular ultrasound and intracoronary angioscopes, which had just begun to be used at that time. This stimulated my interest in pathology, and I wondered “What is it that appears in front of my eyes?” Furthermore, I also began directing my paying attention to molecular biology in blood vessels.

In the latter half of the 1990s, it was said that atherosclerosis may be a disease caused by chronic inflammation, and controlling inflammation could prevent not only atherosclerosis but also myocardial infarction and cerebral infarction associated with it. My desire to solve such questions as, "Would not only HMG-CoA reductase inhibitors (statins) but also anti-inflammatory drugs be effective?”, bolstered my enthusiasm for research which carries on to this day.

While I worked at the National Defense Medical College, I had been doing research on inflammatory cytokine IL-1 (interleukin-1) which exists in the body. However, this topic was concurrently studied elsewhere. On the other hand, IL-1 receptor antagonist (IL-1Ra), which suppresses the effects of IL-1 was not explored by anyone in the cardiovascular field. Therefore, I realized that the research on IL-1Ra should be more of a new perspective compared to IL-1 both in Japan and the rest of the world. Hence, I altered the course of my research and changed my research topic around 2000. Since then, I have published many papers on IL-1Ra as the first author.

My research on IL-1Ra is ongoing, but my group is also conducting various research on other topics. For example, some graduate students are studying hyperinflammation and genes that are involved in immune regulation.

In addition, research is also underway on the effects of IL-1β neutralizers and IL-1Ra with respect to hypertensive nephropathy. Positive data has been published about this and my group made an on-demand presentation at the European Society of Cardiology. Recently, it has been published as a paper in the journal (Clinical Science 2021;135:2035-2048).

It has been made clear that if lack of IL-1Ra promotes the effect of IL-1, neointimal thickening and promotion of atherosclerosis will result after vascular injury. In addition, it has also come to light that atherosclerosis will progress and cause a vulnerable plaque. The results were showing that IL-1Ra stabilizes plaque, and prevents myocardial infarction are almost in line with the large-scale studies published in the United States. This proved that the direction of my research work was not wrong.

IL-1Ra has great potential because it is associated with all parts of the body including kidney disease, atherosclerosis, and aortic aneurysms. Since it is a physiological substance that exists in the body and has no side effects, I believe it is a very useful substance. However, despite IL-1Ra being studied in the fields of blood and rheumatism, there is very little research conducted in Japan on cardiovascular diseases. For this reason, we receive requests for peer reviews and evaluation of the papers of other researchers from editors of various journals and even receive requests for comments from overseas journals.

The drugs that neutralize the effects of IL-1 are already being put into practical use and their effects are also known. However, there may be more appropriate and yet undiscovered medication methods. We would like to shed light on the unclarified aspects of IL-1Ra and expand the possibilities of anti-inflammatory therapy that are advantageous in both cost and safety.

In order to prevent secondary myocardial infarction and cerebral infarction by immunoregulation, we are developing a method to prevent cardiovascular diseases such as atherosclerosis from a new perspective. For example, statins are used for preventing myocardial infarction and cerebral infarction; however, merely lowering cholesterol levels with medicines is insufficient. I am conducting research on inflammatory immunoregulation in order to find a treatment that will culminate in added benefits.

My group is also engaged in research on IL-6. The Biopharmacy Actemra is already used as an IL-6 receptor antagonist. However, I would like to introduce a more suitable administration method for IL-6 and develop a proven anti-inflammatory therapy originating in Japan.

The research building of our university is very well equipped, equal in the quality to the research facility of Harvard Medical School where I studied. The number of catheter cases in cardiovascular medicine is outstanding among university hospitals in Japan and it offers a superior environment for gaining experience in both clinical and research fields.

As an intervention specialist, I conduct research while providing catheter treatment, supervision, and guidance. One of the marvelous things about our university is that we can engage in research in parallel with clinical practice. While time management is essential to achieve both, it can be said that opportunities expand proportionately. Being able to prove what one experienced in clinical practice through basic research gives one an exceptional sense of fulfillment to be a doctor and as a researcher.

Recent trends suggest that younger doctors are more interested in clinical research. The appeal of clinical research lies in the fact that the results are easily yielded, such as being able to observe some significant differences when combining databases. On the other hand, in basic research, persistence is required to find solutions by working with cells and mice every day. However, it can be said that basic research is what has the greatest potential for making outstanding discoveries from a global perspective. By engaging intently in research for several years of your life, you will make new discoveries with lasting results. We would really like you to experience the fascination of such basic research with us.