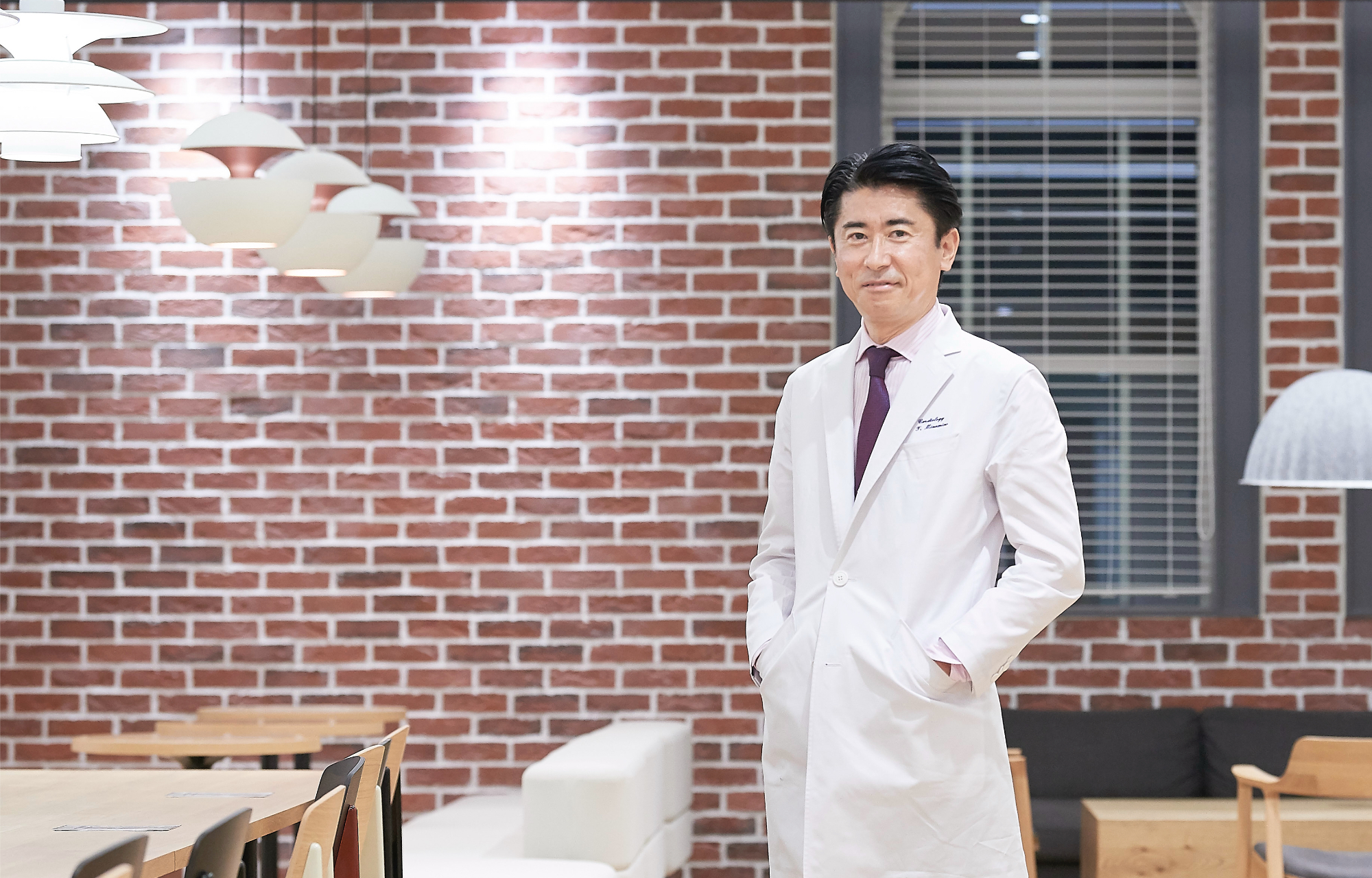 Most cardiovascular diseases are age-related diseases and aging research is the optimum way to cure cardiovascular diseases. Based on this idea, our mission at the Aging Control Group has been to shed light on the molecular mechanism of aging. By researching and developing new treatments based on aging control, the challenge of fulfilling unmet requirements will continue.

My interest in the subject of aging started from a familial dilated cardiomyopathy patient who I happened to treat by chance. Although this disease is now known to a be hereditary disorder, at that time it was still an ambiguous disorder. This led me to become interested in genes and to begin research in this field.

When I was a research student at the University of Tokyo, I would often restrict myself to a given topic which motivated me to think that I should pursue something that can be called my lifework. At that time, I came across a paper on telomere and thought “this is very interesting.” Since incidence of cardiovascular diseases increases with age, I decided to start research on aging and circulatory organs as the main theme.

However, at that time, there were very few initiatives for conducting molecular biological research on the aging of heart and blood vessels. When I was studying abroad at Harvard University, I attempted to present the research outcomes at academic conferences; however, my results were not accepted at time or my presentation did not receive any recognition. Hence, the difficult situation was ongoing. Even after returning to Japan, I thought about quitting my research on many occasions. Thereafter, with the subsequent publishing of the research I conducted while studying abroad as a paper, I began to attain certain results in my research on cardiovascular aging. It was around that time that the subject of aging began to catch public attention. I think I was fortunate that my research area became a trending topic.

Our mission is to study why pathological aging progresses and one of the factors for this is heart disease and atherosclerosis. My research started with telomere and it is based on the "cellular aging hypothesis," which states that every single cell ages. For example, if the senescent cells accumulate in blood vessels arteriosclerosis results; if they accumulate in the heart, heart failure results; and if they accumulate in the abdominal fat, diabetes results. On the other hand, when telomere shortens, an aging molecule p53 increases and cell aging progresses. On the contrary, if genetic manipulation that suppresses p53 is carried out, atherosclerosis, heart failure, diabetes, etc. may be suppressed. For the last 20 years, I have been proving such phenomena (Fig.).

Currently, I am focusing on research and development of senescent cell removal drugs. When telomere shortens or oxidative stress is applied, chromosomes become damaged. This causes DNA damage, resulting in cell abnormalities and increasing the likelihood of cancer. To prevent that, our body has a mechanism to age such cells. Since senescent cells cannot divide, cancer cells also have difficulty growing. However, when there are excessive numbers of senescent cells, the inflammatory molecules secreted by the senescent cells cause chronic inflammation, leading to the dilemma of morbid aging. With the senescent cell removal drug currently under development, experimental results have been obtained where the so-called pathological aging traits, atherosclerosis, diabetes, etc. are improved, preventing the growth of cancer. It has also been found that the pathological aging of very old mice can be reversed. We have already reached the stage where it can be administered to humans.

We have found multiple seno-antigens that specifically appear in the senescent cells, and antibody drugs and vaccines that target those antigens and remove senescent cells (Fig.) are under development. We are proceeding with the assumption that a first-in-human study will be conducted around 2022 and 2023. This study will be published as a paper in 2021.

Recently, we have started developing foods that have senescent cell removal effects through joint research with a confectionery company. We will continue to the aging control research from various angles. 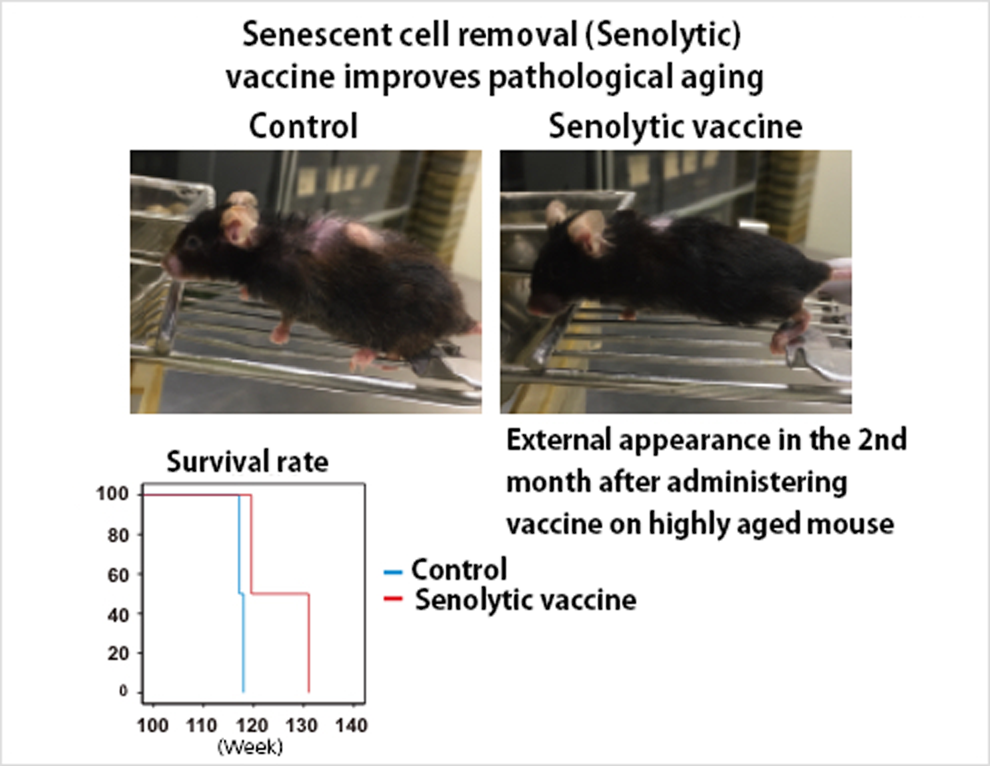 Searching for treatment methods that can be applied to all age-related diseases and not merely cardiovascular diseases.

Most age-related diseases involve the accumulation of senescent cells. With that in mind, we believe that the treatments we are developing may have a fairly wide range of effects on various ailments including Alzheimer's disease, sarcopenia, diabetes and arteriosclerosis, heart failure and osteoarthritis, etc. However, this does not mean that all the accumulated senescent cells are the same; each type has slightly different properties. In the future, it will be necessary to consider personalized medicines such as slightly changing the senescent cell removal drugs depending on the disease.

There are still no guidelines regarding intervention for aging. Therefore, at the Japanese Society of Anti-Aging Medicine where I am the Vice-Chairman, we are working on formulating guidelines and statements over the next few years. This activity kicked off in the 2020 general assembly of the society.

There exists much unscientific information in the area of anti-aging, and it is not clear which piece of information is true. We will first search for scientific evidence and recommend only information which is backed by evidence. Our group also intends to develop more intervention tools.

Since hypertension and most of the diseases treated in cardiovascular medicine are age-related diseases, studying aging is the best way to cure cardiovascular diseases. However, although Japan is in a position to become a Mecca for aging research as one of the world's leading aging countries, the current situation is that the research work in Japan somewhat lags behind that in Europe and the United States. Although the situation is very difficult, we take pride in the fact that we are spearheading the aging research in Japan.

Both clinical practice and research are important in deepening research work. Neither can be carried out with ease, but in reality, it is intriguing to be involved in both with new discoveries to be made. People who are involved in clinical practice can have a slightly different perspective from those who only conduct basic research. For this reason, I would like to have both perspectives as a researcher.

However, in order for everyone to be able to devote their efforts to research, it is necessary to change the structure within the dispensaries and also manage the hospital wards properly. We plan to put a system in place that would allow young doctors to divide their responsibilities without missing opportunities so that they can focus on research at one time and hone their skills clinically at another time.

If you encounter a topic that could be your life work, you can grow while suffering setbacks

Recently, when I look at young researchers, I feel that some people do not have a clear goal for their research. Some people have a half-hearted attitude such as, “This should be good enough.” There are things you may not be able to see if you lack passion, so cultivating hunger for research at time may be beneficial.

It is unavoidable to experience many setbacks along the way. Every time we experience a setback, we become more and more insensitive. In retrospect, it seems as though it was not a big setback and ultimately, we will acquire the will power to continue what we want to do. I have also experienced setbacks in various aspects, but each time I was able to get a glimpse of the essence and was directed in the desired path. Thinking back, I feel that it was not a bad experience.

What I would recommend to everyone is to find lifework that enables you to say with confidence, "I achieved this" when you look back on your life despite repeated setbacks. I would like people in their 20s and 30s to contribute to society in some way and leave your mark therein.

After working as a professor of cardiovascular medicine at Niigata University and a deputy director of the hospital in 2012, Dr. Minamoto has been in his current position since 2020.
His research area is aging and cardiovascular regeneration and his achievements have been published in the High Impact Journal including Nature, Nature Medicine, Cell, Lancet, etc., and he has received the Japanese Circulation Society Award, the Bertz Award, and the Japan Medical Association Research Encouragement Award. He is acting as a director and officer of domestic and overseas academic societies related to internal medicine and cardiovascular medicine, as well as domestic and overseas academic societies related to aging. He also contributes to the scientific research system in Japan by concurrently serving as an academic researcher at the Ministry of Education, Culture, Sports, Science and Technology, a researcher at the Academic Systems Research Center of the Japan Society for the Promotion of Science, and an area advisor for AMED-CREST / PRIME.